I first used Kodak Portra 160 about two years ago. I think I’d heard about it when reading an article by a fellow street photographer. I really liked the feel of it then, and when I used it subsequently during the Edinburgh Fringe. However I had only really used it sporadically. Since my last post on night photography which I shot on Portra 160, and finishing off one of those rolls on the street, something has clicked into place. 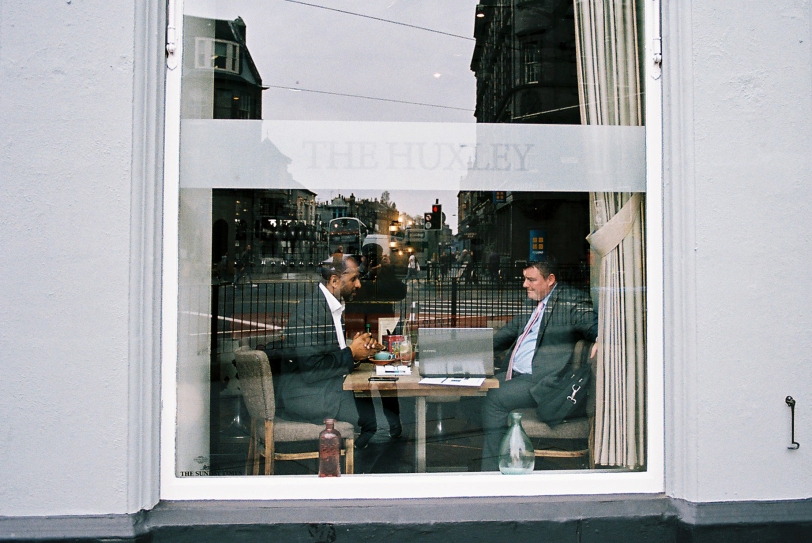 I loaded up my Nikon F3 and hopped on the train to Edinburgh. I didn’t take anything else with me that afternoon. No distractions. No choices to be made, except what to photograph. Nice and simple. I had been feeling a little bit unsatisfied with both my approach and the results, shooting digital on the street.

Lines leading you to.

I love the Ricoh GR, especially for the Station to Station project I’ve been working on over the last year. I couldn’t get those shots with anything else really. But for general street work there has been something missing, and it’s more to do with the process, the physicality, and the actual enjoyment of the act of photography for its own sake. I just hadn’t been feeling it at all. 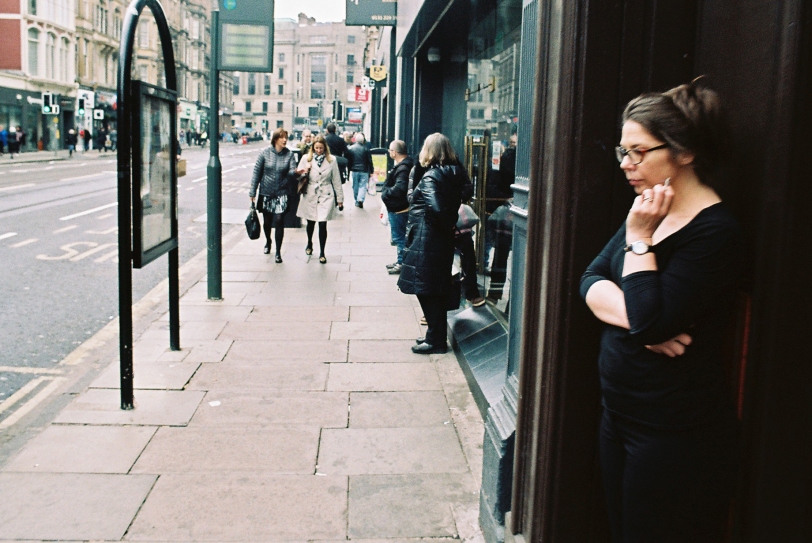 I wanted to think more about what I was doing, to take my time, and be more considered, deliberate. With film, fully manual, restricted to the given iso of the film you are using (unless you push or pull it from the start – and you will be restricted to that till the end of the roll), you have to be all of those things. This does not necessarily mean that you have to be deathly slow, but you have to think more. That can only be a good thing. For me anyway. That translates to a better overall approach which just feels better. 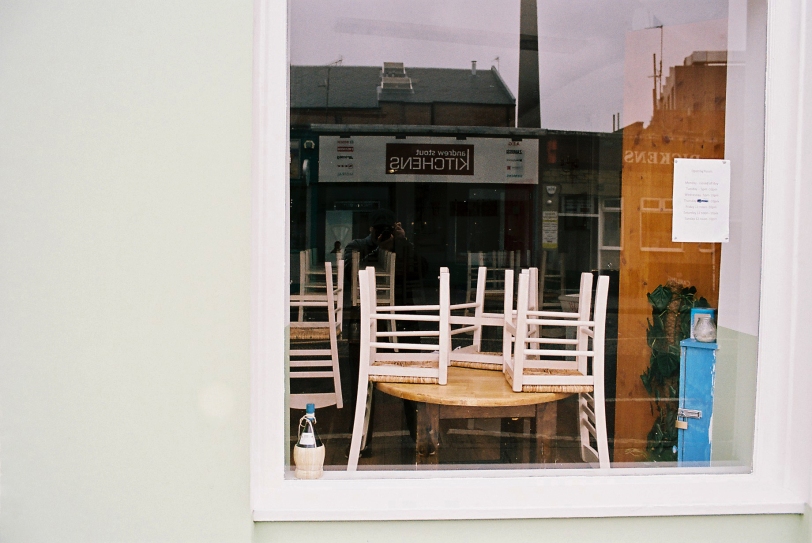 I enjoyed the process. I felt much happier even before seeing the results. Obviously if nothing had worked out I would have been disappointed. I have had plenty of disappointing results with film, when what you envision in your mind’s eye just doesn’t match up with what appears on the negatives. But when it works, it’s something else. By that I don’t mean by accident or good luck. There are always going to be shots that you muck up for one reason or another and are thus technically ‘wrong’. There could be nothing technically wrong but the shots just don’t work somehow.

This roll was where things just fell into place. I began to look at things a bit differently. I was drawn to shop fronts, cafe windows, peeling paint, textures, reflections and angles. There was no rush.

This of course not to say that film is better than digital. There are pros and cons for each. The arguments aren’t really relevant. I think it’s more about feeling. It is said that the final image is all that matters. But how do you get there? I wasn’t enjoying what I was doing lately, the final image felt throwaway, and in a real sense, all too often that’s how they had been made. 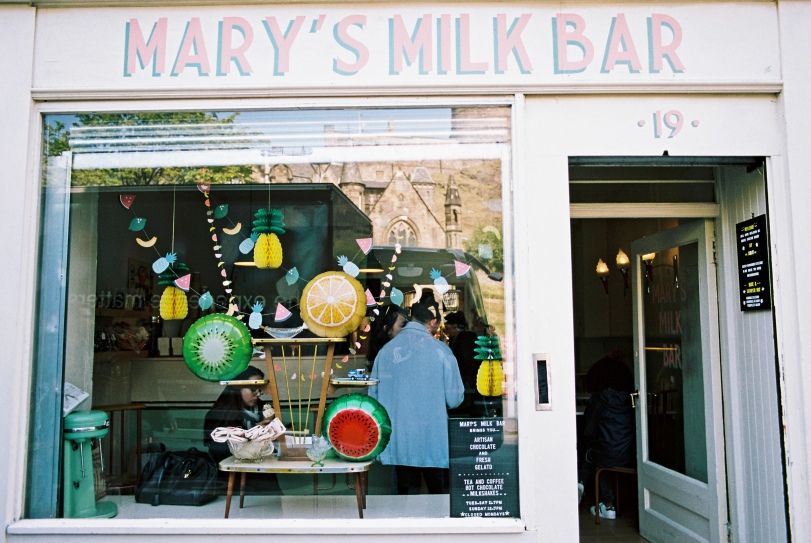 So it does matter. At least to me. I also think that there is a knock on effect, once you start to think differently about something you can’t really go back. To be brutally honest I was becoming lazy, photographing people on the street in a slapdash hit and miss fashion. There were still some images that I quite liked but ultimately not much that made me feel anything. Overall nothing felt right.

All That’s Missing Is.

It shouldn’t feel that way. That it was is an indication that I needed to change something. It was either that or just put the camera down for a while. I didn’t want to do that, I knew that much. Take a break from ‘street photography’? I didn’t want to do that either, it’s the most interesting thing to photograph. It’s unpredictable, no two days are the same, that’s where people are, where the drama and comedy of everyday life is to be found, or that at the very least you have instant access to just by stepping out your front door. 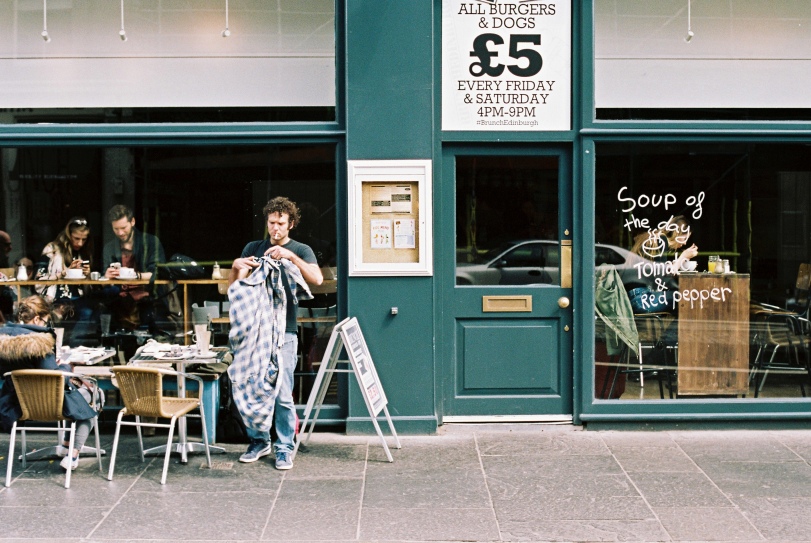 Soup Of The Day.

Film has its limits they say, and it’s expensive. Yes, film does have its limits. Limits aren’t necessarily a bad thing. Having no limits can pose problems too.  If it costs money to shoot then that encourages you to be more thoughtful, to be careful and not waste frames. You still will, but there will be less waste. You could run out of film, that’s also true but the same thing applies.

It’s also nice to have to wait till you see what you have. In regard to b/w film I enjoy developing it myself (or did do when I had access to darkroom and chemicals at college) I would happily set up a darkroom at home just for that purpose. Colour developing is a little bit more complicated so it’s easier for me just to send films off to a lab to be professionally processed. So I usually have at least a week to wait before I can see the results. I like that, it’s something to look forward to, and there are always shots you had forgotten you’d even taken.

Earlier this week I took the train to the seaside town of North Berwick and fired off another couple of rolls. The light was nice and flat, the sky mostly overcast. I took my time and enjoyed myself. I am looking forward to seeing what’s on there.